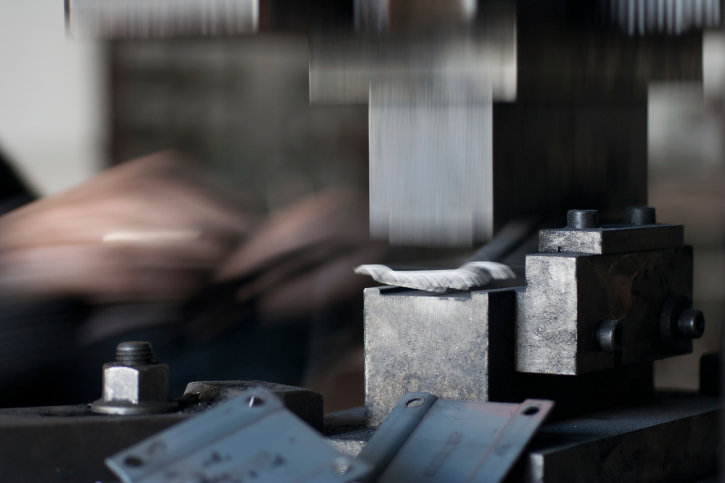 While tubular stamping can often save time and money when making tubular metal products vs. other metal forming processes, such as hydroforming and metal roll forming, it’s important to determine which jobs are right fits for this amazing new process.

Because tube stamping requires a fair amount of tooling, it typically isn’t a viable solution for production runs of tubular metal products with low volumes. Depending on the part design, tool costs could be cost prohibitive for low-volume parts.

Tubular stamping also has one major production limitation that should be taken into consideration: Tubular metal products made via tube stamping are always going to have a seam. Because tubular stamping begins with a piece of sheet metal that is bent it into a tube shape, there’s always going to be a need to join two edges of the sheet to close it into a three-dimensional tubular shape.

Assuming these two main limitations aren’t issues, tubular stamping may be the right fit. It’s a versatile manufacturing process that promises all sorts of production benefits. For one, it’s possible to manipulate a wide variety of metals. Too, tubular stamping can incorporate a variety of supplemental processes such as coining and finishing.

Below is an account of some of the main production considerations for tubular stamping as a method for developing tubular metal products — both assessing its limitations and outlining its potential.

Tubular stamping requires a fair amount of tooling because it involves three stages, each of which involves a number of stamping dies. The actual number of dies required depends on the complexity of the tubular metal part being produced.

In the first stage, a blank that has been shaped to conform to the geometry of the finished part is stamped by a set of successive stamping dies, forming the blank into a tubular shape by bringing the two opposing edges of the blank together.

In the next stage, a second set of successive stamping dies brings the two opposing edges of the blank together more tightly to form a seam along one side of the tubular shape.

The third stage is the compacting stage, which subjects the seamed tubular part to yet another series of successive stamping dies to compress the tubular shape into the final, desired tubular metal form.

Automatic, hand, and progressive transfer can be used to move parts between stamping stations but the feasibility of each method really depends on part design and production volume.

Because tubular stamping starts with a piece of flat metal, which it forms into a tubular metal part, all tubular shapes made with tube stamping have seams. There are two primary methods for increasing the integrity of these seams: re-striking during the tubular stamping process and post-process welding.

This automotive exhaust component, made with a tubular stamping process, had its inherent seam closed completely with post-process welding.

Re-striking a tubular stamped part in order to increase seam integrity can take place during the second and third stages of the process by incorporating specially designed dies. Blanks can also be stamped with predetermined profiles to create sets of “teeth” that interlock when the opposing edges of the flat piece of metal are joined together in the tubular metal part, creating a tighter fit. In the final stage of the tubular stamping process, tubular work pieces are also often further compacted in order to tighten their seams.

If a completely closed tubular metal part is needed — say, if you use tubular stamping to create work pieces for hydroforming — the edges of any seam on a tubular stamped part can be subsequently welded together. Depending on the materials used and the strength and finish requirements, tubular stamped parts can be laser welded, resistance welded, plasma welded, TIG, or MIG welded.

Additional Processes That Can Be Incorporated into Tubular Stamping

The following metal forming options can also be included in a tube stamping process before reaching the compacting stage:

It’s also possible to coin one or both ends of a tubular work piece after the compacting stage.

In addition, a tubular stamping process can be set up to incorporate steps that coat, fill, or line the tubular metal products with polymers such as PVC. This is typically done to increase the structural rigidity of finished parts. It can also be used to protect pre-finished blanks, allowing tubular stamping production lines to work with finished materials — a potential time- and money-saving benefit.

Lastly, fasteners can also be installed during the course of a tubular stamping process.

Materials That Can Be Tube Stamped

Tubular stamping is most often used to produce tubular steel parts, including those made out of high-strength steel, draw quality steel, and stainless steel. Aluminum, brass, copper, martensite, and other alloys can also be tube stamped.

As mentioned above, pre-polished and pre-painted metals are eligible for tube stamping. They are typically outfitted with PVC liners to protect them during the forming process. Post-forming touch-up may be required, depending on part complexity.

The outside dimensions of tubular stamped parts can be held to standard stamping tolerances of ±0.005–0.030 inches, depending on the part design.

Tubular metal products created using a tubular stamping process can have a diameter of anywhere from 1/4” up to the maximum diameter permitted by the size and tonnage of the stamping equipment employed.

Material thickness is also dependent on the size and tonnage of the stamping equipment used but, as a rule, material thickness should be less than or equal to 15% of the diameter of the finished tubular part. Any variation in thickness will go to the inside dimensions of the part, which can be controlled using mandrels. Material thickening is more prevalent than thinning with a tube stamping process.

Still Have Questions About Tubular Stamping?

We hope this article has answered any questions you had about the production requirements for tubular metal products made using a tube stamping process.

If you’d still like to learn more about this amazing new metal forming process, we encourage you to download our guide, “An Introduction to Tubular Stamping.”

We’re also happy to field specific questions directly. Get in touch by contacting us through our website or calling us at 423-745-9090. We’re happy to help.