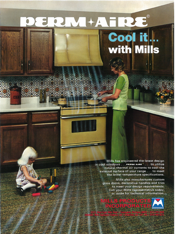 The Invention of the Oven Window

Every year, millions of thankful Americans gather together to peek at their beloved bird through the safety of reinforced glass. Though a major milestone of Americana, the origin of the ubiquitous oven window seemed forever lost to the annals of manufacturing history.

From the patent desk of our founder, Herbert E. Mills, the invention of the oven window assembly is part war story, part love story and part old-fashioned American ingenuity.

A Breakthrough in Oven Technology

Mr. Mills spent most of the 1920s and 1930s working as an engineer for various oven manufacturers. As war spread throughout Europe in 1939, the federal government asked American manufacturers to support our European allies by shifting our production from traditional industrial to military armaments.

Before Mr. Mills reoriented his manufacturing efforts from appliances to ammunition, he came up with the concept of a sealed double paned window that could both withstand extreme temperatures and prevent vapors from entering between window panels. The gas seal ensured clear window visibility at all times – perfect for the family oven. However, with the war in full swing from 1941 to 1945, the project was put on hold.

With the war ended, Mills patented his oven window idea in 1948. Mills attempted to sell the rights to various oven manufacturers, including some of his previous employers. Though many liked the idea, none of manufacturers he approached would commit to producing it. None, that is, until Grand Home Appliance in Cleveland, Ohio. The nameplate of the first Mills’ oven window can be seen at here.

With his first customer a reality, Mills created his own manufacturing company, Mills Engineering, in Detroit, Michigan. Mills’ son, Vern Mills, a World War II veteran and an engineer on the Manhattan Project from 1942 to 1945, joined his dad to help design and produce the new windows.

The Mills family worked together to manufacture the first oven windows in the basement of their home on Bishop Street in East Detroit. Mills purchased his own glass and strip steel raw materials and began roll forming on the family’s four-stand roll former. The true definition of love is a wife that lets you keep a roll former in your basement.

Mills, his wife Lela and his son Vern fabricated and assembled windows in the family basement before hand carrying each assembly upstairs for packaging. The rest, as they say, is manufacturing history.

Mills Engineering eventually became Mills Products – a global metal fabricator with locations across North America. To date, Mills Products has produced over 48 million oven windows for almost every major appliance manufacturer. Browse our website to learn more about our other appliance innovations.

You can also view the design Herbert submitted to the U.S. Patent Office.